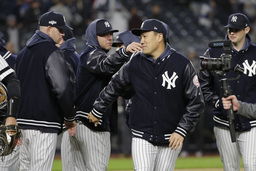 NEW YORK -- The New York Yankees said all the right things about the Minnesota Twins, praising their potent lineup and adding how past postseason history between the teams was irrelevant.

Then they did what they always seem to do against Minnesota this time of year -- get a win.

After opening the best-of-five American League Division Series by rallying from an early two-run deficit to post a 10-4 victory Friday night, the Yankees get a chance to go up 2-0 on Minnesota in Game 2 at Yankee Stadium on Saturday.

"The first one's the biggest one," Yankees right fielder Aaron Judge said following the Friday win. "Sets the tone for the series."

The Yankees are attempting to take a 2-0 lead in a postseason series for the first time since the 2010 ALDS, when they won the first two games in Minnesota and completed the sweep at home.

On Friday, New York's Gleyber Torres and DJ LeMahieu combined for four hits and six RBIs, with each player getting clutch doubles with the bases loaded to continue their run of consistency.

Torres got his big hit after behind 0-2 in the count against Tyler Duffey. LeMahieu contributed a solo homer and a three-run double after he dropped a popup in the second.

The Twins have never overcome a 2-0 series deficit in the wild-card era and are hoping to end an 11-game postseason losing streak to the Yankees. Minnesota wasted homers by Jorge Polanco, Nelson Cruz and Miguel Sano on a night in which it struck out 13 times and went 1-for-9 with runners in scoring position.

The result was Minnesota's 14th consecutive postseason defeat, an all-time major league record. The old mark of 13 was set by the Boston Red Sox from 1986-95.

"Our team as a whole has bounced back exceptionally well all year long," Twins manager Rocco Baldelli said. "Regardless of what happens, the TVs will be on in the clubhouse, the music will be playing on low to medium volume, and guys will be just getting changed and getting ready for (Saturday)."

"We're not out of it by any stretch of the imagination, but we need to show up (Saturday) and hopefully turn those solo homers into maybe three-run homers and we'd be in this," Minnesota first baseman C.J. Cron said. "It's going to be a tough series. We knew that coming in."

Masahiro Tanaka (11-9, 4.45 ERA), the most successful postseason pitcher on New York's active roster, will start Game 2. He is 3-2 with a 1.50 ERA in five postseason starts and is hoping to maintain his playoff success after an uneven season that saw him struggle with his split-fingered pitch at times.

Tanaka battled inconsistency for most of the season. He posted an ERA over 4.00 in three of the final four months but was much better at home overall, going 8-3 with a 3.10 ERA in 16 outings in at Yankee Stadium.

The Twins did not announce their starter until after the series opener as Baldelli said he wanted to see how things developed in Game 1. Afterward, Baldelli declared that rookie Randy Dobnak (2-1, 1.59 ERA) would start Game 2 and Jake Odorizzi would start Game 3 on Monday in Minneapolis.

Dobnak made nine appearances in the regular season and posted a 1.86 ERA in his five starts. He last pitched on Sept. 25 in Detroit, when he allowed an unearned run on one hit in six innings. Dobnak's last three appearances were as a starting pitcher.