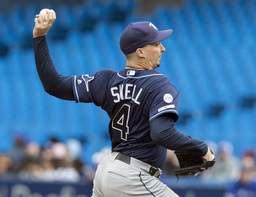 HOUSTON -- While their primary concerns went unrealized in Game 1 of their American League Division Series matchup with the Tampa Bay Rays, the Astros remain focused on the challenge ahead.

Houston ground out nine hits in their 6-2 series-opening victory Friday at Minute Maid Park, four for extra bases. The Rays executed their usual strategy of utilizing multiple relievers in support of right-hander Tyler Glasnow, tasking Astros hitters with preparing for the myriad options Rays manager Kevin Cash has at his disposal. The Astros saddled a pair of Rays relievers with tallies, but Houston realizes that heading into Game 2 Saturday, the work is far from complete.

"Especially with this team, you're preparing for as elite a pitching staff, as effective a pitching staff as anybody," Astros manager A.J. Hinch said of the Rays. "They may not have a lot of famous names the way that we do or other teams do but they have just as effective names. This is one of the best pitching staffs in baseball, so the preparation really is more about their depth and less about any in-game (adjustments).

"We've played the Rays. We're used to not expecting a second plate appearance against the same pitcher."

Perhaps they will get that second plate appearance against the Rays' most renowned starter, left-hander Blake Snell (6-8, 4.29 ERA), who will get the start Saturday. Snell won the 2018 AL Cy Young Award after leading the league in wins (21), ERA (1.89) and adjusted ERA (217). His encore campaign was marred by injury, with midseason elbow surgery ultimately limiting Snell to 23 starts and a modest 107 innings.

His start against the Astros will mark his fourth since his return to the rotation on Sept. 17.

For his career, Snell is 2-2 with a 4.73 ERA in six starts against the Astros, including an 0-1 record this season after he gave up five runs in six innings in his lone start against Houston.

"It's exciting for me strictly because it was an up-and-down season," Snell said. "I had a lot to go through and battle. Just to be here and be a part of it is very exciting for me. It allows me to prove a lot of things to myself before the season is over with."

Snell will work opposite Astros right-hander Gerrit Cole (20-5, 2.50 ERA), who was equal parts durable and overwhelming in the regular season, posting career highs in both innings (212 1/3) and strikeouts (326).

For Cole, maintaining the momentum that established him as a viable Cy Young Award candidate this season is the foremost goal. He has recorded a victory in each of his last five starts, posting a 1.00 ERA with 60 strikeouts against five walks in 36 innings. Cole last tasted defeat on May 22 against the Chicago White Sox after allowing six earned runs on seven hits and one walk with seven strikeouts over five innings. Over his 22 starts since, Cole is 16-0 with a 1.78 ERA with 226 strikeouts in 146 2/3 innings. He has dominated by every measure.

"Well, I don't really think about it," Cole said of the streak while knocking on wood. "You know, sometimes wins and losses are out of your control. So I love getting them, but my job is to go out there and just, with whatever I got that day, just give my team the best chance to win.

"I feel I've executed that plan more oftentimes than not. Because we have such an unbelievable offense and we play such tight (defense), and we've just been working really well as a unit for the second half of the season, I think that statistic has taken off a little bit, for lack of a better word."