Rays turn to Morton to keep season alive vs. Astros 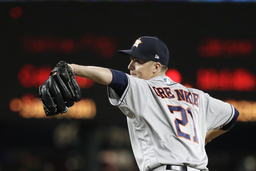 Veteran right-hander Charlie Morton looks to go 2-0 in potential postseason elimination games in the last six days, this time against his former team, when the Tampa Bay Rays try to stay alive in the American League Division Series in Game 3 against the visiting Houston Astros on Monday afternoon.

The Astros (2-0), top-seeded in the AL playoffs, have suffocated the Rays (0-2) with brilliant starting pitching in the first two games of the series, getting a combined 14 2/3 innings of five-hit, shutout ball from Justin Verlander and Gerrit Cole in 6-2 and 3-1 wins.

Houston's third top-notch starter, right-hander Zack Greinke (18-5, 2.93), will get first crack at clinching the best-of-five series and sending the Astros to the AL Championship Series for the third straight year.

Morton (1-0, 0.00) has not taken a loss in his last five postseason appearances, four of which he made for the Astros in 2017 and 2018. He went the final four innings of the 2017 World Series-clinching victory over the Los Angeles Dodgers in Game 7.

The 35-year-old was brilliant in his first postseason effort for the Rays, limiting the Oakland Athletics to one unearned run in five innings last Wednesday in a 5-1 road win in the AL wild-card game.

He faced the Astros twice in the regular season with mixed results. He beat them with five innings of three-hit ball in the opening series of the year at home, but then was bombed for six runs, including a Robinson Chirinos homer, in four innings in a blowout loss at Houston in August.

Rays manager Kevin Cash said he believed just the sight of Morton taking the field in Oakland last week, after the Rays had scored a run in the top of the first, comforted his generally postseason-inexperienced club.

"When the first inning ended, I kind of said to myself, 'We were fortunate to have Charlie Morton on the mound,'" Cash noted to reporters afterward. "We get the 1-0 lead. A young pitcher in that situation, that environment, you just wonder how he's going to be able to handle that.

"But Charlie, been there, done that. His veteran experience, I think, allowed that."

He didn't get a decision when pulled after 5 2/3 innings in a 9-8 home loss to Tampa Bay in August, having allowed five runs, including homers by Austin Meadows and Travis d'Arnaud.

Astros third baseman Alex Bregman has been the offensive star of the series so far, going 3-for-6 with a home run, two walks and four runs scored. He boasted after Game 2 that having Greinke lined up for the next game gives the Astros a good feeling.

"Just like Verlander and Cole, he studies," Bregman said. "He knows the game of baseball. He knows his strengths, and he has a plan that he's going to try and execute every time he takes the mound. We love playing behind him."

The Astros swept Cleveland when they had the opportunity last season in the ALDS, before getting eliminated by Boston in the ALCS.

The Rays, meanwhile, managed one win against Boston the last time they were in the ALDS in 2013, also having come off a wild-card victory that season.