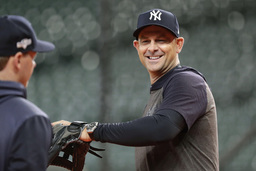 HOUSTON -- The New York Yankees blitzed through their American League Division Series with such unmitigated vigor that their dismantling of the "Bomba Squad" Minnesota Twins came as a surprise relative to the amount of denigration dumped upon their pitching rotation this season.

Now the Yankees pitchers will turn their attention to the well-balanced lineup of the Houston Astros, beginning with Game 1 of the AL Championship Series on Saturday.

New York right-handers Masahiro Tanaka and Luis Severino combined with southpaw James Paxton to limit the power-laden Twins to just four runs on 12 hits and four walks with 19 strikeouts in 13 2/3 innings, setting the foundation for a three-game ALDS sweep.

Over the course of the 162-game regular season, the Yankees were lionized for their intimidating collection of sluggers and their overpowering bullpen arms. Their rotation, while not reviled, was far from celebrated.

The top three of the Astros' rotation, meanwhile, form the heart of Houston's bid for a second World Series title in three years.

In the ALCS opener at Minute Maid Park, the Yankees will turn to Tanaka (11-9, 4.45 ERA in the regular season), knowing that the relievers backing him up figure to be just as vital to the cause.

"I think it's clear the bullpens will have to get important outs," Yankees manager Aaron Boone said. "You would expect some close games, so games that come down to the end where if you're going to be able to win a ballgame you're going to have to close it out. So obviously we lean on our bullpen heavily."

The Yankees received a combined 41 outs from their starters against the Twins. Astros right-hander Gerrit Cole, who closed of the Tampa Bay Rays in Game 5 of that ALDS with eight stifling innings, amassed 47 outs alone in that series.

New York relievers Aroldis Chapman, Zack Britton, Tommy Kahnle and Chad Green all worked multiple innings in relief against Minnesota. The quality of their work this series might dictate the Yankees' shot at winning their first AL pennant since 2009.

The Astros will take a different approach. In Zack Greinke, Justin Verlander and Cole, they feature three aces capable of pitching deep into a start while doing so effectively. While Greinke (18-5, 2.93 ERA), who will start Game 1 against the Yankees, was tagged for six runs and three homers over 3 2/3 innings in a Game 3 loss to the Rays, his recent results against New York are impressive.

Greinke faced the Yankees twice this season, allowing three runs on seven hits and one walk with four strikeouts over 12 2/3 innings. Still, he doesn't pile up strikeouts at the pace of Cole and Verlander, who finished No. 1 and No. 2, respectively, in the majors in whiffs this year.

"I'm not walking on eggshells the days (Greinke) pitches because he throws 88 to 90 miles an hour," Astros manager AJ Hinch said. "And the other side is not completely comfortable just because the velo is not that insane rate that Gerrit Cole's is or JV."

Familiarity likely will factor into the result, but the team that benefits most is anyone's guess. The Astros and Yankees grappled over seven games in the 2017 ALCS, with each team victorious in all home games and Houston advancing to the World Series, where it captured its first title.

The memory of that series loss remains fresh for the Yankees, who aim to capitalize from it.

"One thing I can say is that we've been here in 2017," Tanaka said. "We know what it's like in here, so I think that experience will definitely help going into the game."