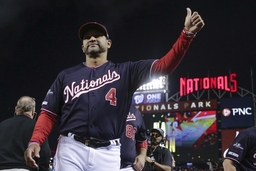 In a season of record offense around the major leagues, the Washington Nationals have ridden their starting pitching to the cusp of the franchise's first World Series berth.

Left-hander Patrick Corbin is next in line for the Nationals, who could complete a National League Championship Series sweep of the Cardinals with a Game 4 victory Tuesday in Washington. Rookie right-hander Dakota Hudson will start for St. Louis.

Corbin has a challenge ahead if he wants to keep pace with the Nationals starters who went before him as the team built a 3-0 lead in the NLCS. Anibal Sanchez, Max Scherzer and Stephen Strasburg pitched a combined 21 2/3 innings without giving up an earned run.

"They are feeding off each other, they really are, and it's fun to watch," Nationals manager Dave Martinez said. "They sit there and watch and talk and communicate. They get together and go over what they did to make them successful that day. ... Then they go out and compete (with each other) every day. It's a lot of fun."

Corbin has made four appearances in the postseason so far, but just one was a start. All 33 of his regular-season appearances came as part of the rotation, and he went 14-7 with a 3.25 ERA.

Corbin was the losing pitcher in Game 1 of the NL Division Series against the Los Angeles Dodgers despite pitching well (two runs, one earned, with nine strikeouts in six inning). He then was roughed up by the Dodgers in Game 3 when he gave up six runs in two-thirds of an inning in relief, absorbing another defeat.

However, Corbin has rebounded with 1 2/3 scoreless innings in two outings since, including retiring the only batter he faced in the ninth inning of Game 2 in the NLCS.

"I think what's good is we all try to help each other," Corbin said of the Washington staff. "When someone's out there pitching, we're all on the bench talking, going over the other team's lineup, maybe what they see, what they don't see. That's what's been so great, being able to discuss what we think, what we don't think."

Corbin was 1-1 with a 4.91 ERA against the Cardinals this year in his first season with the Nationals. In seven career starts against St. Louis, he is 2-2 with a 4.17 ERA. The Cardinals' Dexter Fowler has the most success against him, going 6-for-19 (.316) with a double, triple and three RBIs.

The Cardinals will try to extend their season behind Hudson, who went 16-7 with a 3.35 ERA during his first year as a major league starter.

In his only two starts against the Nationals, both earlier this year, he was 1-1 with a 2.08 ERA. The victory came Sept. 15 at home when he gave up two runs on five hits over seven innings.

"No concession speech ... has been written," Cardinals manager Mike Shildt said. "This is a team that can absolutely win four games in a row, and clearly we have to start (Tuesday). We have to get after it, which we will and which we have. We are in a tough spot, but there is precedent for it."

The only team to win a baseball postseason series after losing the first three games was the 2004 Boston Red Sox, who rallied to defeat the New York Yankees in the American League Championship Series, and they eventually won the World Series.