Astros need 'pen in Game 4 to even World Series 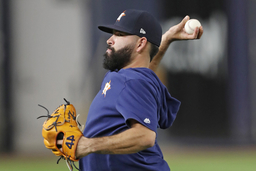 It will have to be a group effort Saturday if the Houston Astros are going to even the 2019 World Series.

Back in it with Friday's 4-1 road victory over the Washington Nationals to trail 2-1 in the series, the Astros will now turn to their bullpen. The Nationals saw their eight-game postseason win streak come to an end in Game 3.

A game full of pitching changes under high stress is not a foreign concept for the Astros, who turned to the bullpen in Game 6 of the American League Championship Series against the New York Yankees and secured their ticket to the World Series.

The Astros went with Brad Peacock to open things in that game, as the right-hander gave up one run over 1 2/3 innings. The key was Houston's three-run first inning off the Yankees' Chad Green, as New York also went with a bullpen game. The Astros advanced with a 6-4 victory.

It will be Jose Urquidy (0-0, 2.08 ERA this postseason) opening for the Houston this time around.

"We used a lot of resources tonight, but this is the World Series, and we're going to keep going at it," Astros manager A.J. Hinch said on the FOX broadcast after Game 3. "Jose Urquidy has been really good for us. He's started a little bit, and he's been in the 'pen, and we're going to turn it over to him in the first inning (of Game 4), give him an opportunity to go as deep as he can."

The bullpen needed to cover 4 1/3 innings in Game 3 after Zack Greinke put plenty of runners on base but gave up just one run. Five relievers saw action, including Josh James, who got the victory, and Roberto Osuna, who got the save. Peacock (one-third of an inning), Will Harris (1 2/3 innings) and Joe Smith (one inning) also contributed scoreless outings.

Urquidy's chance to start came from his performance in Game 6 of the ALCS, when the 24-year-old rookie held the Yankees to one run over 2 2/3 innings, striking out five. Saturday will mark one week since the right-hander threw 45 pitches in that game.

The Nationals will start left-hander Patrick Corbin (1-2, 6.91), who pitched a scoreless inning in relief during Game 1 and last started in Game 4 of the National League Championship Series against the St. Louis Cardinals. Corbin gave up four runs over five innings in that game, but the Nationals still advanced to the World Series with a 7-4 victory.

A win Saturday would move the Nationals one victory away from their first World Series title. A defeat would not only even the series, but also bring another matchup against Astros right-hander Gerrit Cole in Game 5 on Sunday. The Nationals did get to Cole in Game 1, scoring five runs on eight hits over seven innings in a 5-4 victory.

"We've been doing really well, driving in runs with men in scoring position; it just didn't happen (Friday)," Nationals manager Dave Martinez said. "... I will say this, though: The fans were awesome. I mean, it was electric. The boys in the dugout, they were fired up, they were. I'll relay a message to the fans: Bring it again (Saturday). It was great. I loved it."