Trout expected back for Angels' finale vs. Rays 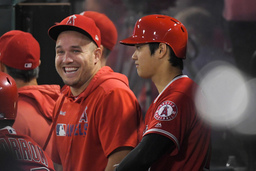 Mike Trout will return to the starting lineup Sunday for the Los Angeles Angels in the series finale against the Tampa Bay Rays.

At least, that's the plan.

Trout has been listed as day-to-day for a week now, each day the star center fielder expressing the hope that he would be able to get back on the field "tomorrow."

Out of the starting lineup since Sept. 6 because of a nerve condition in his right foot, Trout and the Angels have continued to push back his return, taking a cautious approach. His only appearance in a game since then came Sept. 7 as a pinch hitter. He was intentionally walked and immediately replaced by a pinch runner.

"I tested it out during pregame," Trout told reporters prior to Saturday's game. "Felt OK hitting, just running it was still sore. The plan is to play (Sunday). I told you guys (he would return) Friday, but I think (Sunday) is going to be the day for sure."

Despite his recent time off, Trout still leads the American League with 45 home runs and is the favorite to win his third MVP award. So even though the Angels are not in the playoff race, shutting him down for the season isn't probable, according to Angels manager Brad Ausmus, because doctors say Trout can't do any more damage to his foot.

"It's just what he can deal with the last couple weeks," Ausmus said.

If and when Trout is back in the lineup, it'll likely be as the designated hitter initially.

Left-hander Patrick Sandoval, 0-3 with a 5.28 ERA in seven games (six starts), is still looking for his first major league win. He has pitched well enough to win, particularly his start Aug. 28, when he shut out the Texas Rangers on one hit for five innings, striking out nine. Sandoval, though, got a no-decision. He has never faced the Rays.

His last time out he allowed three runs and three hits in seven innings, striking out seven and walking one against the Rangers, but got a no-decision.

Yarbrough began the season as a pitcher who would follow the opener, but has pitched so well that Rays manager Kevin Cash decided to give him the first inning as well.

"I think Yarbs is really driven," Cash told the Tampa Bay Times. "He came in, we talked a couple weeks ago. We talked about the opener, the bulk guys following and stuff like that. I think he was ready for a challenge to get an opportunity to get more traditional with the starting role.

"He's done more than step up, he's dominated. He's turned into a guy that we really count on, rely on, for good reason. He just goes out there and competes. And it seems like every time he takes the mound, we have a chance to win the game."

One of Yarbrough's three losses this year came against the Angels on June 13, when he allowed five runs and five hits in six innings. Two of the hits were home runs; one by Shohei Ohtani and one by Albert Pujols.

In three career appearances (one start) against the Angels, Yarbrough is 2-1 with a 6.23 ERA.