Trout back in Angels' lineup after missing 3 games 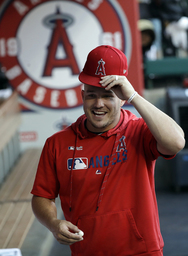 ANAHEIM, Calif. (AP) Mike Trout is back in the Los Angeles Angels lineup after missing the previous three games due to a mildly strained right calf.

The two-time AL MVP will be the designated hitter Thursday when the Angels complete a four-game series against the Houston Astros. He leads the league in home runs (30) and RBIs (75) along with a .305 batting average, which is ninth.

Trout suffered the injury during Sunday's game against Seattle. Prior to the injury, he had eight home runs in seven games.