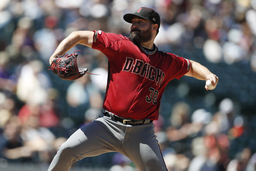 PHOENIX (AP) The Arizona Diamondbacks put left-hander Robbie Ray on the 10-day injured list Thursday because of lower back spasms.

Ray was removed from Wednesday's start at Colorado while warming up before the start of the third inning. He gave up one run and one hit, and the Diamondbacks went on to a 7-6 loss.

Ray had an MRI that showed nothing irregular in his back. He missed about two months last season with an oblique injury.

"He's had problems with his oblique in the past and those things go through your head," manager Torey Lovullo said. "It's quite a relief. We had to make the right decision for him moving forward instead of fast-forwarding things."

With off days, Ray would miss only one start if he is able to return the first day eligible, on Aug. 25.

Duplantier has made three starts for Arizona this season.