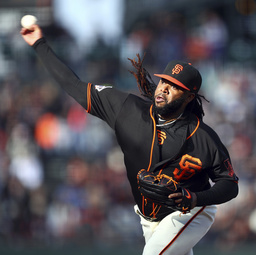 PHOENIX (AP) The San Francisco Giants could accelerate their timeline for Johnny Cueto to help with their pursuit of an NL wild card.

Cueto had season-ending Tommy John surgery a year ago. The right-hander was scheduled to throw 45 pitches in a rehab start at Class A San Jose on Thursday night.

The original plan was to have Cueto make at least two more rehab starts after that, but that could change.

Giants manager Bruce Bochy says "Definitely needs a start tonight and another start. We'll see where we are at. I'm not saying we're going to do anything. I'm just saying that we will re-evaluate."

Cueto went 3-2 with a 3.23 ERA in nine starts last season before the injury. He is in the fourth year of a six-year, $130 million contract.

Bochy says Cueto is "pretty close to 100 percent, he just doesn't have the strength and stamina to go deep into games."

The 33-year-old Cueto struck out seven in four scoreless innings in his first two rehab appearances in the rookie Arizona League.