Shohei Ohtani to have surgery on kneecap, miss rest of year 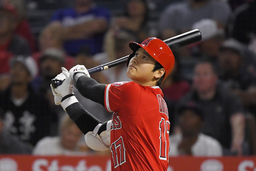 The Los Angeles Angels slugger and pitcher will miss the rest of the season to have surgery on his left kneecap, the team announced Thursday. Los Angeles (67-80) has been eliminated from playoff contention with 15 games left.

Ohtani will have surgery Friday on his bipartite patella, or a two-part kneecap that didn't fuse together at birth. The condition is rare, congenital and usually harmless.

But Ohtani began to feel occasional pain in his kneecap back in February during his early comeback from Tommy John surgery. The discomfort increased when he began throwing in the mid-80s recently in his rehab work, according to general manager Billy Eppler.

"It had started to cause Shohei a little apprehension as he was increasing the intensity of his mound progressions," Eppler said. "It was aggravating him a little bit, so we made the decision to play it safe and not have him continue the mound progressions and get this bipartite condition addressed now."

Ohtani will put his throwing program on hold while recovering from surgery, but he should complete the throwing portion of his Tommy John rehabilitation by December, Eppler said. The Angels will wait until later to formulate a plan for Ohtani in spring training in February, when he hopes to be a two-way player again.

Ohtani batted .286 with 18 homers and 62 RBIs in 106 games this season as the Angels' designated hitter. The 2018 AL Rookie of the Year has been a steady presence in the middle of the Angels' lineup while he simultaneously went through a year of elbow rehabilitation.

Ohtani had never reported any pain from the bipartite kneecap to the Angels or his Japanese teams before this season, Eppler said.

Ohtani and the Angels thought about waiting on the surgery until his full throwing progression back from elbow surgery was complete. But Ohtani decided Wednesday morning to have the season-ending surgery, and the slugger homered later that day in his final game of the year.

"We felt that it was better to get it done now, because it was causing some reluctance or apprehension, whatever word you want to use, in his mound progressions, and we wanted to increase the intensity," Eppler said. "If we pushed the intensity and he compromised something in his delivery, that could lead to some unforeseen issues."