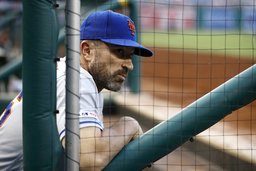 NEW YORK (AP) Mickey Callaway went 11-1 in his first 12 games as manager of the New York Mets. After that, nothing ever seemed to go smoothly for him again.

Following more than a year on the hot seat, Callaway was fired Thursday by the Mets after missing the playoffs in both his seasons at the helm.

The move came four days after New York wrapped up an 86-76 campaign that marked a nine-win improvement over his 2018 debut. But a strong second half wasn't enough to save the embattled Callaway, who had one year remaining on his contract.

New York went 46-26 following the All-Star break and made an unlikely charge into the National League wild-card race, only to be eliminated during the final week.

"I feel unfulfilled. I feel we left some games on the field that we should have won, and we didn't fulfill what we really had as a goal, which was get to the postseason," chief operating officer Jeff Wilpon said on a 30-minute conference call with reporters. "We're not playing October baseball, and that's what it's about."

Joe Girardi, the former Yankees and Marlins skipper, and Houston Astros bench coach Joe Espada have been mentioned as potential replacements for Callaway.

"The goal is to have the best person, regardless of his resume," general manager Brodie Van Wagenen said.

Van Wagenen said the Mets had already "spent a good amount of time" identifying an "expansive list of potential candidates" as they begin a "thorough and deliberate process."

"I think we're looking for strong leadership. We're looking for a voice that can keep our clubhouse culture going in the right direction, can keep this team unified and that can accelerate our path here," Van Wagenen said. "I think at the end of the day, it's less about any shortcomings for Mickey and it's more about the upside opportunities that we feel like some of the other potential candidates may bring to us.

"Mickey helped us get to this point. I think he helped us start this progression and I think we got better year over year with him," the GM added. "We don't want to take the foot off the pedal."

While the persistent Mets certainly made strides this year, it's no surprise Van Wagenen wanted to make a change and bring in his own choice to manage the team. The 44-year-old Callaway was hired under previous GM Sandy Alderson and retained after Van Wagenen, a former player agent, took the job nearly a year ago.

"We knew that we wanted to give Mickey the chance to prove himself to Brodie," Wilpon said. "I think having one year left on his contract was probably a little (problematic), because he was either going to be extended - otherwise he was going to be a lame duck, which would have put us into a really tough bind with everything."

With the Mets front office holding organizational meetings this week, Van Wagenen and Wilpon flew to Callaway's hometown in Florida to meet with him Thursday morning and exchange thoughts.

After the meeting, they informed Callaway of their decision to let him go and he was a "true gentleman," Wilpon said.

A confident Van Wagenen, after upgrading the roster during his first offseason, challenged rivals in the competitive NL East to "come get us." But the Mets finished third in the division behind Atlanta and Washington, left out of the postseason for a third year in a row.

It was a tumultuous tenure for Callaway in his first stint as a manager at any level. Several in-game decisions drew heavy criticism, the Mets batted out of order once in 2018, and he was fined by the club for cursing at a beat reporter during a June blowup at Wrigley Field in Chicago following a tough loss to the Cubs.

The next day, it took Callaway two news conferences to make a public apology.

"I think that we can all say that that was a tough learning experience for me. I can choose how I want to react to any situation and I chose poorly," Callaway said last weekend. "That was not a good decision on my part."

Some thought Callaway, who enjoyed an extremely successful run as Cleveland's pitching coach under Terry Francona before joining the Mets, would (or should) be dismissed last offseason following such a rocky first year in New York.

He was kept on with several new coaches put in place to help, including bench coach Jim Riggleman - an experienced major league manager.

With the Mets slumping in May and Callaway's status in serious doubt, the team held a news conference and Van Wagenen announced Callaway would remain the manager for "the foreseeable future."

As the Mets continued to struggle, however, pitching coach and Callaway pal Dave Eiland was fired and replaced by 82-year-old Phil Regan - part of a plan to restructure the pitching department that yielded positive results the rest of the way.

Van Wagenen again voiced support for Callaway later in the season, and ownership stood behind him as well.

New York went 163-161 under Callaway. On the final day of the season, he said he'd had no in-depth discussions with the front office about his future but felt no anxiety either, because he "left everything on the field."

NOTES: Van Wagenen said starting pitcher Noah Syndergaard and demoted closer Edwin Diaz will be back with the team next season. Both were thought to be possible trade candidates this offseason. ... Callaway's coaches are still being evaluated, Van Wagenen said.