A capsule look at the Nationals-Cardinals playoff series 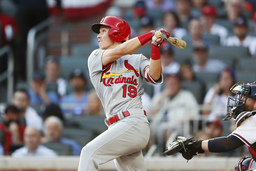 By The Associated Press

A look at the best-of-seven National League Championship Series between the Washington Nationals and St. Louis Cardinals:

Second postseason meeting between the teams. Cardinals won 3-2 in 2012 Division Series, when Nationals famously shut down Strasburg before playoffs to protect his arm following Tommy John surgery. St. Louis overcame 6-0 deficit in decisive Game 5 at Washington, rallying from two runs down with four in ninth inning to win 9-7. That was first of four NLDS heartbreaks in six seasons for Nationals - three in Game 5 at home - before they finally got over hump against NL-best Dodgers in Game 5 this year to win a playoff series for first time since team moved to Washington ahead of 2005 season. ... Nationals looking for first World Series appearance. Franchise's only previous trip to NLCS came as Montreal Expos in 1981, a 3-2 loss to Dodgers. ... Cardinals seeking 20th trip to World Series, which would tie Dodgers and Giants for most in NL history, and first since losing to Boston in 2013. Back in NLCS for first time since five-game loss to San Francisco in 2014, last of four straight trips to the round. ... Cardinals won three of four in Washington from April 29 to May 2, beating Corbin, Sanchez and Scherzer before Strasburg topped Hudson 2-1 in series finale. Wacha, Wainwright and Mikolas earned wins. St. Louis took two of three from Nationals at home in September, with wins going to Hudson and Wainwright. Corbin beat Mikolas in middle game of series. ... Scherzer was born in St. Louis and drafted by Cardinals in 43rd round out of high school before going to college at Missouri. He went 0-2 with 5.27 ERA in 2 starts vs. hometown team this year. ... Teams tied for NL lead with 116 stolen bases. ... Nationals set franchise record with 231 homers. ... Washington's bullpen ERA of 5.66 was worst in NL. To help cover, Nationals have used Strasburg, Scherzer and Corbin in relief throughout playoffs. Meanwhile, regular relievers have 5.54 ERA in 13 innings. ... St. Louis ranked 11th in National League in runs. ... Cardinals had second-best ERA (3.82) in NL behind Dodgers, and second-most shutouts (14). ... St. Louis had best fielding percentage in majors.

Nationals: Surged to playoff spot for fifth time in eight years by turning things around after dismal start; Nats were 19-31 after May 23 loss to Mets completed four-game sweep. Washington is first team in more than a century to fall 12 games below .500 and finish with 93 wins or more. ... There were plenty of early calls for manager Dave Martinez to be dismissed, but GM Mike Rizzo never wavered in his public support of the skipper. In the end, Washington (93-69) won 11 more games than in 2018, when it missed the playoffs after two straight NL East titles under manager Dusty Baker, who was then fired. ... Nationals rallied late on big hit by Soto to win wild-card game against Milwaukee and did it again in Game 5 of NLDS at Dodger Stadium. Rendon and Soto homered on consecutive pitches from three-time Cy Young Award winner Clayton Kershaw to tie score in eighth inning, then Kendrick hit grand slam in 10th for 7-3 victory. So in first season since star slugger Bryce Harper left as a free agent, Washington became first team in major league history to come back from three or more runs down twice in elimination games during same postseason. ... Success is built mainly on strong starting rotation, which is among the best in majors, led by Scherzer, Strasburg and Corbin. Those three all ranked in top 10 in NL in ERA, strikeouts and opponents' batting average. ... This is Nationals' first playoff appearance as a wild-card team. Trying to become only third wild card to reach World Series since MLB went to 10-team playoff format in 2012. ... Martinez won his postseason debut as a manager in wild-card game against Milwaukee. Washington went 82-80 during his rookie season as a skipper in 2018. ... Martinez missed three games and part of a fourth because of a heart problem in September. He had a medical procedure and was back in the dugout a few days later.

Cardinals: Routed the Cubs 9-0 in regular-season finale to win first NL Central title since 2015. Cardinals (91-71) had clinched playoff spot with victory over Cubs on Sept. 21. Division crown came in Mike Schildt's first full season as manager. ... St. Louis was four outs from elimination against Braves in Game 4 of NLDS but rallied behind Molina for 10th-inning victory. Cardinals then broke loose for 10 runs in first inning of deciding Game 5 at Atlanta on way to 13-1 rout. Became first team in baseball history to score 10 runs in opening inning of a postseason game and equaled highest-scoring inning in postseason history. ... Cardinals were a .500 team at All-Star break before midsummer tear. ... The 23-year-old Flaherty went six innings in finale against Atlanta for first postseason win of blossoming career. He had 16 strikeouts in 13 innings during NLDS. Flaherty was 7-2 in 15 starts after All-Star break with 0.91 ERA, third-lowest in major league history. ... Hudson issued most walks in league (86). ... The 38-year-old Wainwright was battered by Cubs in final regular-season start, allowing four homers and six runs in 4 1/3 innings. But he threw 7 2/3 shutout innings in NLDS outing vs. Braves. ... Edman hit .358 in September. ... Wong strained left hamstring running out a grounder Sept. 19 at Wrigley Field and missed two weeks, but looked good during NLDS and delivered some key hits. ... Martinez, the team's closer, was hit hard by Braves during NLDS, allowing six runs, six hits and three walks in 3 1/3 innings. ... St. Louis was third in NL rotation ERA and bullpen ERA, making up for its below-average offensive output. ... Cardinals went from last to first in fielding, committing 133 errors last season and just 66 this year. ... St. Louis was just third team in franchise history with at least 200 homers and 100 steals in same season.

- Red Thunder. Both teams are getting powerful production from the dangerous sluggers in the middle of their lineups. Rendon, an NL MVP contender, led league in RBIs and ranked second in OPS during regular season. He's kept it going in playoffs, hitting .412 (7 for 17) with a homer and 5 RBIs during NLDS. Behind him, 20-year-old Soto has .930 OPS with 2 homers and 6 RBIs in his first postseason. On the other side, Goldschmidt and Ozuna both batted .429 (9 for 21) in NLDS. They each hit a pair of homers and combined for 7 RBIs.

- Mad Max. Scherzer gave up two early homers to Milwaukee in wild-card game, allowing three runs and four hits in five innings. But the Nationals came back to win after his teams lost his previous seven postseason games - four with Washington and three with Detroit. The three-time Cy Young Award winner, slowed by a back injury this season, helped out of bullpen during NLDS and then threw seven-inning gem to win Game 4 against Dodgers with Washington facing elimination. He is 5-5 with 3.60 ERA in 19 postseason games, 15 starts.

- Injury Updates. Suzuki left Game 5 of NLDS when he was hit in left hand and then helmet by a pitch. X-rays were negative and he's expected to play in NLCS opener as long as he's cleared in concussion protocol. Robles ranked fourth in majors with 12 outfield assists. But he has mild right hamstring strain that sidelined him during NLDS and his status for this series was unclear. Cardinals right-hander Michael Wacha missed NLDS and is expected to be left off roster for this series as well while recovering from strained shoulder.