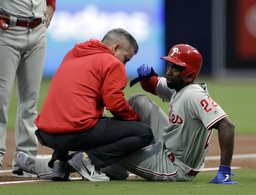 He tore his ACL last year - and it wasn't the first time.

"I had an ACL injury when I was in high school, so to kind of compare the two, as far as the process goes and the rehab, it's a lot quicker," the Philadelphia outfielder said Monday. "You're doing things a lot faster maybe than you did 16, 17 years ago. At the same time, I'm not 16 and rehabbing. I'm 33 now."

McCutchen played only 59 games last year before going down with a torn ACL in early June. The Phillies finished 81-81, a disappointment in their first season after signing Bryce Harper. Philadelphia replaced manager Gabe Kapler with Joe Girardi and added Zack Wheeler to its rotation. If he can stay healthy, McCutchen could give the team a lift as well.

The Phillies held their first workout with the full squad Monday. McCutchen said he plans to be ready for opening day.

Girardi said McCutchen isn't where he was at this time last year, simply because he's now coming off an inury.

"Every week we're going to make an evaluation of where he's at, and what he's ready to handle the next week," Girardi said. "I know he hit out on the field today and did those type of things."

McCutchen was the National League's MVP in 2013, when he was with the Pittsburgh Pirates. He was traded to San Francisco in 2018, then was dealt to the New York Yankees toward the end of that season. He signed with the Phillies before last season.

McCutchen's batting average has slipped since his days as an MVP candidate, but his durability hasn't really been an issue. Before last season, he had played in at least 153 games in eight of the previous nine years.

He hit .256 with 10 home runs and 29 RBIs in his abbreviated 2019. The injury snapped a streak of eight straight seasons with at least 20 home runs.

He played mostly left field but spent some time in center as well. He says the injury shouldn't prevent him from playing center if needed.

The Phillies were in first place in the NL East when McCutchen hurt his left knee during a rundown June 3 at San Diego, but he downplayed the idea that his absence was what derailed the season.

"It's nice to think, `Oh, it was because I stopped playing, got injured.' I don't think that really," he said. "I think it's just us as a full team together, just kind of having to grow."

McCutchen likened the Phillies' 2019 season to LeBron James' first season with the Miami Heat after teaming up with Dwyane Wade and Chris Bosh. The Heat made it to the NBA Finals but lost.

"They had the squad. They had the superstar team," he said. "They didn't pan out the way people expected it, but they stayed together."

NOTES: All-Star C J.T. Realmuto says he isn't too concerned about the outcome of his arbitration hearing. He requested $12.4 million and the Phillies offered $10 million. "I'm either making 10 or 12 million dollars. I'll be happy either way," he said. "I'm blessed to get to do what I do for a living for a lot of money." Like McCutchen, Realmuto was in his first season with Philadelphia last year. He set career highs with 25 homers and 83 RBIs and won a Gold Glove.