Ohtani tells Japanese press he feels 'down' when Angels lose 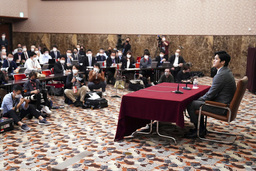 TOKYO (AP) Even Shohei Ohtani, arguably the best player in the major leagues, feels down at times, particularly when his team isn't winning.

And that's been the case during each of the four seasons he's been with the Los Angeles Angels, all of which have ended with losing records.

Sharing his mental state was among the few small nuggets Ohtani revealed in an hour-long interview on Monday at the Japan National Press Club.

The Q-and-A session focused heavily on local matters about being back home, about local food and local baseball personalities, and even questions about when the 27-year-old might start a family.

"I think this is something you cannot force to happen, it just naturally happens," he said, speaking in Japanese through an interpreter. "I think it's still well ahead of me."

Ohtani is under contract for next season at $5.5 million, which will be his highest annual salary thus far. He remains under the Angels' control through 2023 and could become a free agent after that season.

Questions about free agency did not come up in the interview, although he was asked about his taxes in the United States.

"Los Angeles has high tax rates," he said, indicating he was happy to pay them. "So slightly more than half of what I earn has to be paid in taxes. So I pay my taxes. It's not that I consume a lot. I really don't spend, so it just goes into my savings."

Almost every question began with a congratulatory message, often long ones. He was asked to comment on his memories of the 2011 tsunami, earthquake and meltdown of three nuclear reactors that killed almost 20,000 people in northeastern Japan - his home region.

And he was asked several times about being "down" emotionally and getting through it.

"How do you overcome that?" he was asked.

"Of course I feel down," he said, indicating his emotions toward the of end of the just-completed season.

"Since I joined the major leagues, the team has not been winning and we didn't have much prospect of going beyond the regular season. So in the latter half of the season, psychologically it was more stressful. And of course I feel down occasionally when I can't hit - or when my pitches are hit."

However, Ohtani said that even suffering through a losing season was better than not playing at all, which he experienced in several stretches because of injury.

"So even feeling down included, it was a wonderful year," he said.

Ohtani is a leading candidate for the American League MVP award, which will be announced later this week.

He was asked where he would be when the award winner is revealed.

"I don't know where I will be," he said straightforwardly, which was typical of his responses.