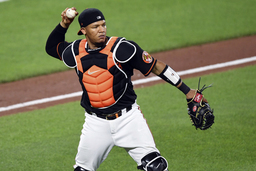 Vogelbach, an All-Star in 2019 while playing for Seattle, hit .219 with a .349 on-base percentage, nine homers and 24 RBIs in 93 games this past season. His playing time dipped late in the season after the Brewers acquired Tellez from the Toronto Blue Jays.

Tellez, 26, went .272 with seven homers, 28 RBIs and an .814 OPS in 56 games with Milwaukee. He also homered twice in the Brewers' National League Division Series loss to the eventual World Series champion Atlanta Braves.

Before coming to Milwaukee, Tellez hit .209 with four homers and eight RBIs in 50 games with Toronto in 2021.

He's a career .235 hitter with a .305 on-base percentage. Severino played for the Washington Nationals from 2015-18 before spending the last three seasons in Baltimore.

Sullivan has no major league experience but got a big league deal anyway. He has spent six seasons playing in the minors for the Tampa Bay Rays organization. The 27-year-old spent 2021 batting .223 with nine homers and 35 RBIs in 90 games for the Rays' Triple-A affiliate in Durham, North Carolina.

Milwaukee needed to find catchers to back up 2021 All-Star Omar Narvaez after Manny Pina signed a two-year, $8 million contract with the World Series champion Atlanta Braves and Luke Maile became a free agent.

In another move Tuesday, the Brewers non-tendered reliever John Curtiss, who tore the ulnar collateral ligament in his right elbow less than two weeks after the team acquired him from the Miami Marlins.