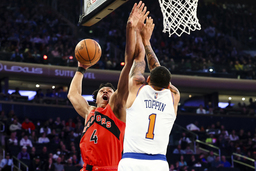 They ended it with the best games of their careers.

Toppin scored a career-high 42 points, Quickley had 34 points, 12 assists and 10 rebounds, and the Knicks beat the Toronto Raptors 105-94 on Sunday night.

The Knicks finished 37-45 after making the playoffs last season, but second-year players Toppin and Quickley ended on high notes. Quickley had career highs in points and assists and equaled his best night on the boards.

"It's crazy because me and Quick rode up here together and said let's do something special," said Toppin, who averaged 27 points and six rebounds in the last five games of the season he started in place of Julius Randle. "Me and him was literally in the car driving here saying we was going to do that. To have the opportunity to do what we did today was amazing."

Quickley didn't want to be left behind by his close friend's exploits and became the youngest player in Knicks history to post a 30-point triple-double.

Quickley's other triple-double was April 3 at Orlando. He had 20 points, 10 rebounds and 10 assists.

Alec Burks added 10 points for the Knicks, who dressed only eight players. They won their last two games and seven of 10.

Toronto held out Pascal Siakam and Fred VanVleet in their final game of the regular season ahead of their first-round playoff matchup with fourth-seeded Philadelphia.

Chris Boucher scored 21 points and Gary Trent Jr. added 17 for the Raptors, who had their winning streak snapped at three games.

"I think it's a good matchup for us, but honestly I'm just happy to be in the playoffs . especially the way we started the year," Boucher said.

Raptors coach Nick Nurse, who didn't coach because he was under the weather, said before the game that his team is ready to compete when the playoffs start next weekend after they were chosen in the preseason to finish at the bottom of the Eastern Conference.

The Knicks trailed by three points early in the fourth quarter before going on a 9-0 run to pull away.

Toppin, who won the Slam Dunk Contest during the NBA All-Star Game weekend festivities in February, treated the Madison Square Garden crowd with a rim-shaker with 1:36 left in regulation and was later fouled on a 3-point attempt in front of the Toronto bench before he hit each three free throws to extend the lead 105-92.

New York jumped off to a quick start, taking an 11-2 lead just over two minutes in and closed out the opening period with a 31-22 advantage, led by 12 points from Toppin.

Toppin closed out the half with a 3-pointer that put the Knicks ahead 53-48.

Knicks president Leon Rose, who had gone all season without speaking publicly, called the team's season a disappointment during an interview on MSG Network that aired before Sunday's tip-off.

New York finished 11th in the Eastern Conference a year after reaching the playoffs and losing to Atlanta in the first round.

"I feel as though it's been a disappointing season from the standpoint of wins and losses," the former agent turned league executive said. "And we are going to take good hard look at it after the season to evaluate everything that's going on. . The first year things clicked. This year from the beginning things didn't click. We faced adversity. We had some tough stretches."